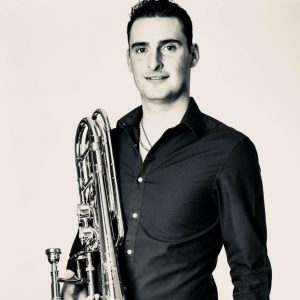 As a soloist, he has won several cantonal, national and even international competitions. In 2016 he won the European competition for young soloists in Luxembourg. In 2018, in Utrecht, Holland, he is crowned European Trombone Champion and European Vice-Champion in all categories.

In 2015, he discovered his passion for conducting Brass Band. He therefore took lessons at Géo-Pierre Moren in Vétroz and in 2017, he resumed his first village brass band, "L'Edelweiss" in Les Diablerets, 3rd category Brass Band.

In 2018, Lionel is hired as director of "L'Echos de la Dent-Blanche" in Les Haudères, a first category brass band. Lionel makes his first steps on the Swiss Brass Band scene, as director, in 2019, where he conducted the "Oberwalliser Brass Band" (OBB) in Montreux during the Swiss Championship in first category.

In August 2020, Lionel Fumeaux will start his activity as director of the B formation of the Brass Band 13 Etoiles.